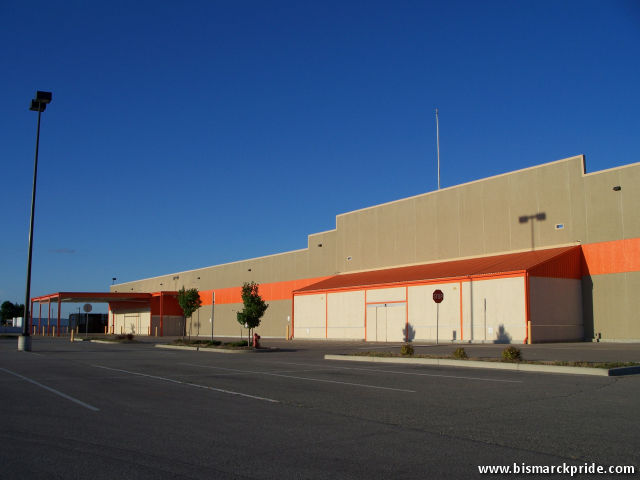 When the highly anticipated Home Depot opened its doors in June 2005, area residents were elated to finally have a second choice in the big box home improvement category.

Up to that point, their only choice had been Menards, who had first come to Bismarck in 1986 at Gateway Mall. Home Depot’s closure three years later not only came as a shock to many, but an extreme disappointed.

So what was the problem? For years, many locals had been hoping specifically for a Home Depot to open its doors, and Bismarck definitely can support more than one big-box home improvement chain.

The biggest reason was a flooded market, which suddenly contained three big box hardware stores after Home Depot and Lowes both opened within a year. Home Depot’s decision to open directly across the street from its chief competitor was definitely an example of poor judgment. What the nation’s second largest retail chain didn’t anticipate North Dakotan loyalty, as locals continued to frequent Menards.

Green Mill was another highly anticipate business to close shortly after opening.

Home Depot wasn’t the first longly-awaited business that has closed in Bismarck. Does the name Green Mill ring a bell?

What Will Happen To The Building?

The former Home Depot building will likely remain empty throughout 2010, although it wouldn’t surprise me if an investor buys it at the upcoming auction for possible future use. I don’t expect any big news on what will eventually occupy the big orange box though.

Although the reserve price isn’t announced, its initial asking price really is quite low for a brand-new building that size. Home Depot is eager to rid itself of the building quickly as it will ultimately cost more sitting empty than the company may lose in its sale. The problem is, in this economy, those who can afford such a price aren’t buying like they were 2 or 3 years ago, with most businesses consolidating rather than expanding.

In the long-run, I do not see the Home Depot building remaining as one sole store; instead being divided up into two or more tenants – similar to how the former Best Products store was converted into Big Lots and Office Depot in 1997. There has been little interest shown recently by big-box companies that could fill a 130,000+ square foot store.

The likeliest of contenders to eventually occupy the building include Fleet Farm; Toys R Us; Bed, Bath, & Beyond; Savers; Burlington Coat Factory; Gordmans; or a sporting goods chain, most likely to be Gander Mountain.

One specific rumor that had been floating around was that Sears and Kmart would combine and re-open as a Sears Grand store at the location, but with Sears’s recent lease renewal at Gateway Mall, this isn’t likely to happen.

A common request I’ve seen is that the building be turned into somekind of entertainment complex, housing anything from a bowling alley to an indoor go-cart track. The probability of this taking place, unfortunately, is very remote.

Bismarck definitely could use some kind of entertainment facility. Bismarck has been able to support such facilities in the past, but the cost to open such a business is extremely high. Resulting margins can be good in the long-run, however it can take years to balance the initial startup costs.

In addition to the multi-millions dished out for the building, one hoping to open such a business would also be looking at multiple licencing fees, including a liquor license, which would be essential to ensure profitability. Depending on the type of business, they might also be required to pay royalty fees to record labels for permission to broadcast music.

Wheel-A-While was extremely popular with the younger population.

Bismarck has had many popular hangouts in the past, but for varying reasons, none remain in existence.

Anyone old enough to remember probably has many found memories spent at the popular indoor roller skating rink, Wheel-A-While, but despite its popularity, the business closed around 1986.

The city took another big blow when Capitol Lanes, once the state’s largest bowling alley, closed its doors in May 2004. With its 50 lanes, cafe, bar, and arcade, Capitol Lanes had remained a popular hangout all the way up to its closure, for the young and old alike. Its closure left Bismarck without a bowling alley for the first time in decades.

It wouldn’t surprise me at all if, at least in the short-term, the building is turned into office space. The increasingly overcrowded state government, or perhaps Bismarck Public Schools may find short-term use for the building. I’m not specifically predicting that though, it’s just a possibility.

Ultimately, I suspect that the building will remain home to retail. It is an extremely valuable piece of land for retail operations, tucked away in a fully developed retail landscape on one of the city’s busiest routes.

Let’s also not forget that the former Home Depot building is not the only big space that needs to be filled.